Order of the Amaranth

The Order of the Amaranth is a fraternal organization composed of Master Masons and their properly qualified female relatives. In its teachings, the members are emphatically reminded of their duties to God, to their country and to their fellow beings. They are urged to portray, by precept and example, their belief in the “Golden Rule” and by conforming to the virtues inherent in TRUTH, FAITH, WISDOM and CHARITY they can prove to others the goodness promulgated by the Order. 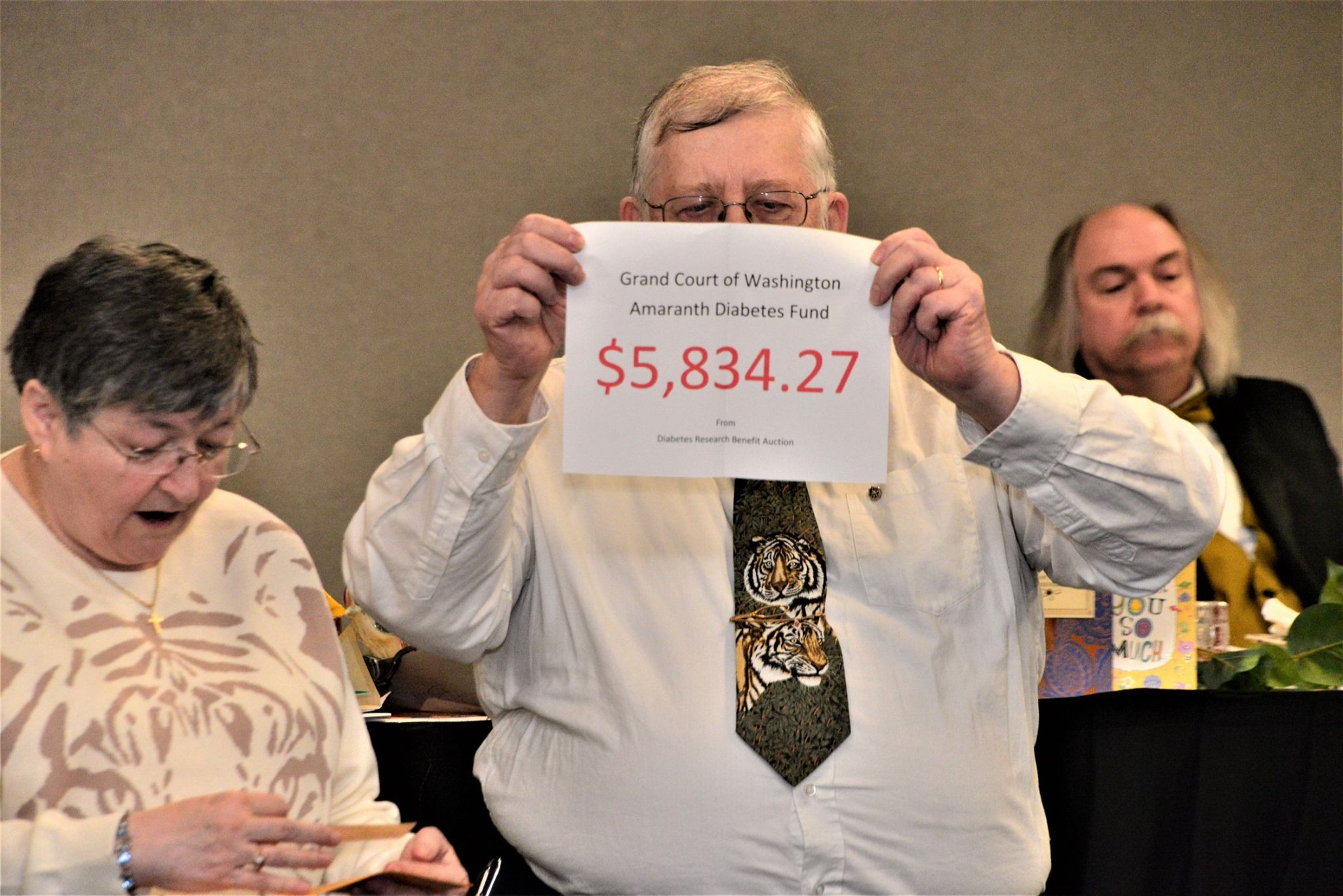 The extent of its Charitable Work and overall Benevolence is limited only by the opportunities that exist, and the ability to secure adequate funding. Its Philanthropic project is the Amaranth Diabetes Foundation. The flag of the appropriate country is prominently displayed at all meetings creating a strong sentiment of patriotism and devotion to the respective land that we love.

Conspicuously upon the Altar is placed the Holy Bible, the inspired word of God. Its divine truths send forth its sacred luster to all parts of the globe and is used among us as a symbol of the will of God. It reminds us of the omnipresence of the “Almighty” overshadowing us with His Divine Love and dispensing His blessings among us.

The leaves of the Amaranth plant (Like the “Laurel”) is indicative of distinction and honor, and when formed into the “Amaranthine Wreath” with its never ending circle, is typical of the bond of fraternal friendship which encircles our beloved order, and which has a central place upon our Standard (Ceremonial Flag), surrounding the “Crown and Sword”.

The Order of the Amaranth, in Washington, promotes fellowship through patriotism, teamwork, charitable participation and social interaction. Our membership advocates community service, educational funding and finding a cure for diabetes through research. -Adopted December 9, 2000.

Queen Christina was just six years old when she became ruler of Sweden some three hundred years ago. During her reign as Queen, she created the Order of the Amarantha for the ladies and knights of her royal court. Queen Christina herself played the character, Lady Amarantha, who was portrayed as being a beautiful, virtuous and talented Lady of the Court. The name of the Order was possibly chosen from the beautiful never-fading red Amaranthus flowers growing in profusion in Spain and Portugal. The Order was perpetuated and presently exists in the Royal Court of Sweden. Originally, the Royal and Social Order of the Amarantha had no connection with Masonry as it does today.

In the middle of the 19th century, a number of societies were introduced, in which females could become active members. The “Order of the Eastern Star” and the “Order of the Amaranth” are just two such organizations.

In 1860, Brother James B. Taylor from Newark, NJ, attempted to compose the material to start a New “Society”. He learned that in 1653, Queen Christina of Sweden had combined a group of “Sir Knights” and “Ladies” together to have “gala” parties. She called this group the “Order of the Amaranta”.

“The person kneeling down before the Queen held up his hands between the Queen’s hands: she declared his duty in that Order, was to maintain and defend virtue and the honor of virtuous ladies, to endeavor to correct vice, to perform honorable actions, to keep his faith inviolable, in all matters relating to honor and virtuous performances; which the Court promised to observe. The Queen put upon his left shoulder and tied under his right arm a scarf of crimson taffeta, with a broad silver fringe; and the jewel of the order hung in the scarf, it was about the compass of half a crown; it was made of gold, a round wreath wrought and enameled like a laurel, and in the midst thereof two great AA reversed, set thick with diamonds, the two AA for the first and last letters of Amaranta, and about the wreath was written ‘dolce nella memoria’, ‘Sweet is the memory’, that is of a certain noble and famous great lady named Amaranta, who was an eminent pattern and example of the highest honor and virtue, in memory of whom this Court was instituted.”

Brother Taylor was so impressed with what he had read that he copied many of the symbols and much of the phraseology used therein. He even copied the name, the “Order of the Amaranth”.

Brother Robert Macoy obtained the material that Brother Taylor had written about the Amaranth, and revised and perfected it into “ritualistic” form so that it could be used as the ritual for the third degree. From 1873 until 1921, all members of the Amaranth were required to join the “Order of the Eastern Star” first, and to maintain this membership to be able to stay members of the Amaranth.

In 1921, by mutual agreement, this requirement ceased. They are now completely separate organizations, though many are members of both organizations.

Under the jurisdiction of the Supreme Council, we have forty-three Grand Courts (each is Statewide), located in the United States, Canada, Australia, England, Philippines, and Scotland. Also, Subordinate Courts (local) in Hawaii, New Zealand and Ireland (there are a few individual states in the U.S. that do not have Grand Courts).

The “Order of the Amaranth” means many things to many people. To its early members, it meant the opportunity to build upon the strong foundation of TRUTH, FAITH, WISDOM and CHARITY. A fraternal Order having for its purpose, service to humanity, set to the music of fraternal love.

To its present members, the “Order of the Amaranth” means a challenge to build higher and stronger upon these foundations of fraternal love and service. It means the hand of fraternal friendship to those in distress. It means thinking and remembering about its members in their hours of sorrow and sickness. Most of all, it means the opportunity to serve our fellow human beings, to enjoy the close fraternal ties of mutual respect and understanding to enrich our lives with friendship worth far more than gold or silver.